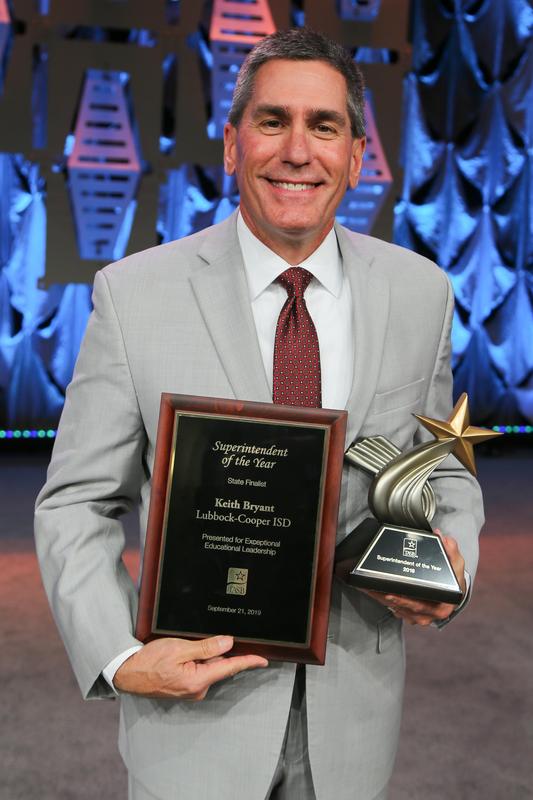 Bryant has led Lubbock-Cooper ISD for six years, where he serves more than 7,000 students.  He has been in education administration for 23 years. Bryant earned his bachelor’s degree, master’s degree, and superintendent certification from Texas Tech University.

The selection committee cited Bryant’s selfless service to the district, its staff, and its students. That includes the premium he places on listening with an open mind to all voices—not only listening attentively to teacher needs but to student input. Committee members noted that through such initiatives as the district’s student-comprised Superintendent Advisory Council, Bryant makes it clear that students come first. Noted earlier in the awards process were Bryant’s thoughts on the future of public education and the necessity for educators to embrace change, including new technology.

Lubbock-Cooper ISD plans to honor Bryant with a reception on Thursday, October 17.

Sponsored by TASB, the SOTY program has recognized exemplary superintendents for excellence and achievement in educational leadership since 1984. Candidates are chosen for their strong leadership skills, dedication to improving educational quality, ability to build effective employee relations, student performance, and commitment to public involvement in education.

TASB is a nonprofit association established in 1949 to serve local public school boards. School board members are the largest group of publicly elected officials in the state. The districts they represent serve more than 5.3 million students.